Collision repair facilities remain open but business has slowed dramatically in the second half of the month. Shops more optimistic in most recent study compared to mid-March.

The vast majority collision repair facilities responding to a CollisionWeek study last week were open, but have seen more slowdowns at the end of March versus mid-month due to coronavirus response. Operator sentiment on their business survival and sales improvement in the second half of 2020 have improved in the most recent study.

Research conducted by CollisionWeek across U.S. collision repair facilities on April 2-3 shows collision repair centers have remained open in the face of the coronavirus response and are more optimistic about the future of their business and growth after the crisis ends.

In the most recent study, 90.4 percent of respondents reported their facilities were now under shelter-in-place or non-essential business closure restrictions, up from 48.8 percent in our March 19-20 survey.

When asked about their sales for the full month of March in our most recent study, 51.9 percent reported lower sales. Those respondents reporting higher sales in March represented 23.6% of respondents and those reporting sales were the same in March totaled 24.5% overall. 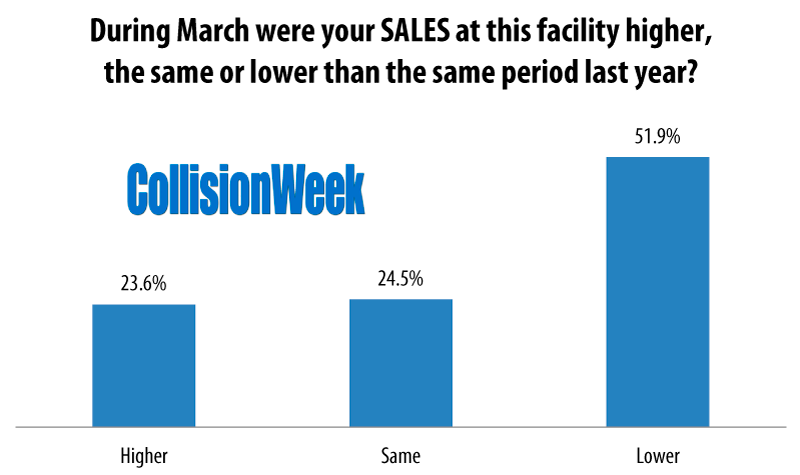 Overall, respondents reported that sales declined 28.9% in March versus March 2019. The median overall was a 25% decline for the month compared to the previous year.

Across those that indicated sales had declined, the average sales decline reported was 40.7% with a median response of 30 percent. Numerous respondents in the areas hardest hit by the coronavirus in California, and the New York City metropolitan area, including northern New Jersey, reported decreases as high as 75-95% as shelter-in-place orders took effect earlier in the month than many Midwest and Southern states.

Those that reported higher sales for the month reported an average increase of 9.1% and a median of 9.5% higher.

While the majority of respondents in our mid-month survey who had indicated they had laid off employees were concentrated in the hard hit states New York, California and Pennsylvania, layoffs were more widespread at the end of the month with all regions having shops that reported reducing the number of employees during the month. 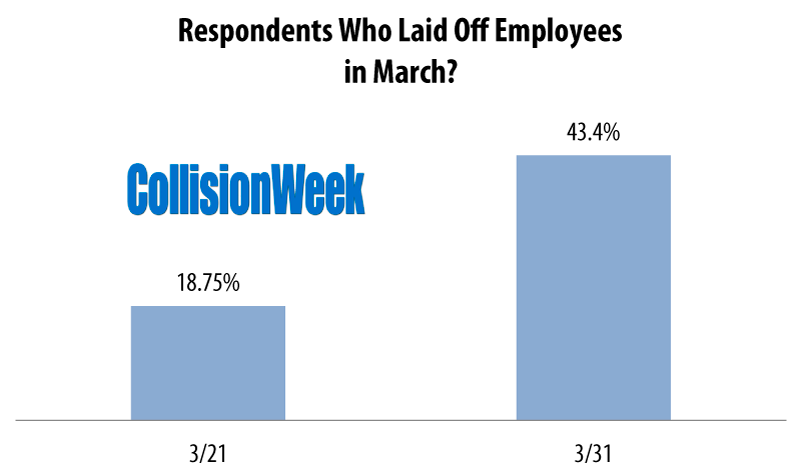 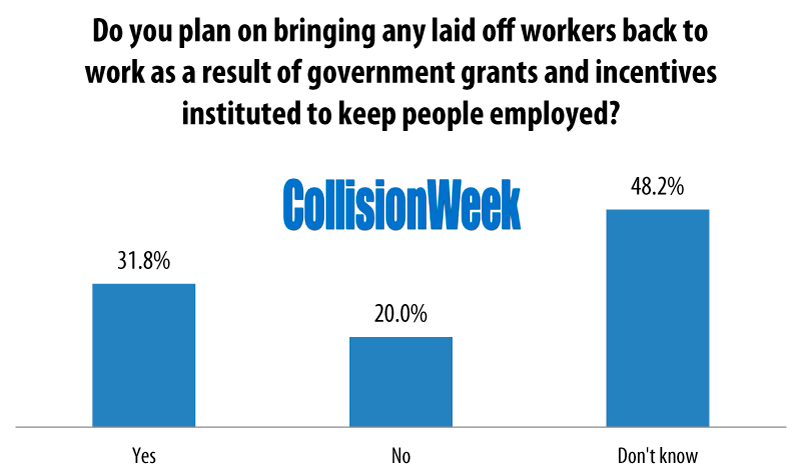 Asked if they planned to bring back laid off employees as a result of government grants and incentives instituted to keep people employed during the crisis, 31.8% of respondents said yes and 20% said no. The majority, at 48.2% said they didn’t know.

A key concern for the collision repair industry is the shutdown of vehicle manufacturing plants and the ripple effect to part suppliers and the overall parts supply chain. Last year’s strike at General Motors led to widespread disruptions for collision repair facility operators unable to secure parts. While vehicle production plants are widely closed, manufacturers are keeping their parts distribution centers open using volunteer staff during the coronavirus crisis.

Asked if they had experienced any parts or materials supply issues 30.5% of respondents said no, down almost 20 percentage points from 50.1% that said no in our March 19-20 study. 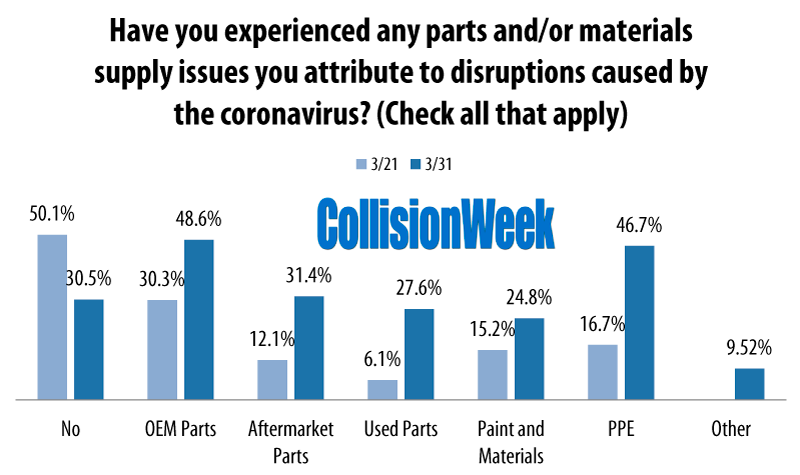 As explained previously, in the face of widespread shortages of PPE for medical providers responding to the crisis, the government provided waivers for health care providers to use industrial PPE equipment. According to 3M, for example, 90% of their N95 masks typically go to general industrial and commercial users and were now being delivered to health care.

The most common comments from collision repair facilities were that their parts and materials suppliers were reducing the frequency of deliveries and staffing levels.

Optimism for the Future 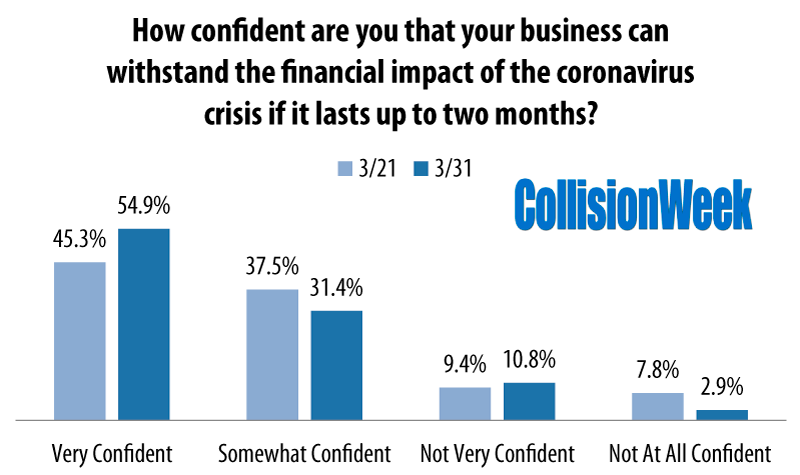 Those who indicated they were not very confident increased to 10.8%, up from 9.4% of respondents in the previous study. Those respondents that were not at all confident declined to 2.9% from 7.8% in the March 19-20 survey. 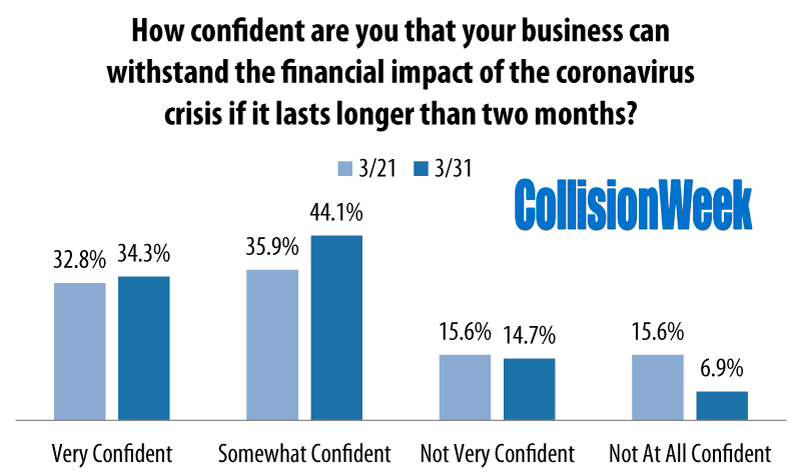 Confidence in business improving in the second half of the year also increased during the time between the two surveys. 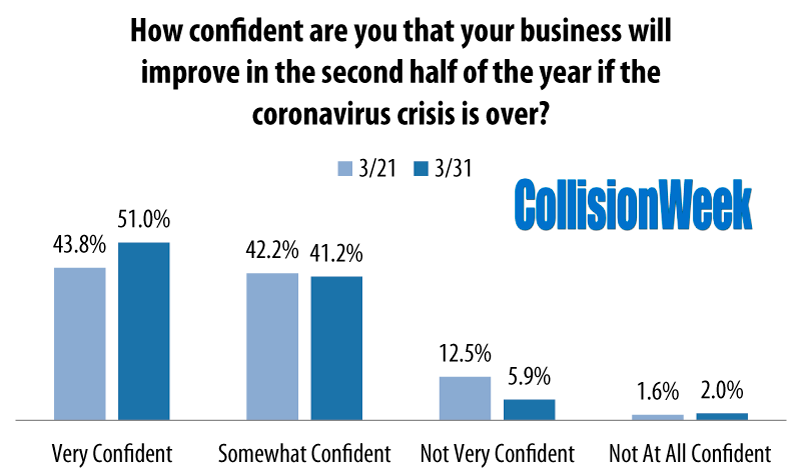