More than three weeks after the skyscraper-sized Ever Given was freed from the Suez Canal, major ports are struggling with a backlog of vessels. Some carriers are skipping port calls in Europe to avoid congestion, contributing to container shortages in other parts of the world, including Asia.

More than three weeks after the skyscraper-sized Ever Given was freed from the Suez Canal, a critical global trade corridor, ports on major shipping routes are grappling with a backlog of vessels as sea freight traffic ramps up after disruptions caused by the coronavirus pandemic last year.

Rotterdam, a major port city in the Netherlands, is expecting 15 ships this week carrying a total capacity of 196,600 twenty-foot equivalent units (TEUs), which will line up behind 85 that are there already, according to Project44, a logistics service provider. The shipping delay on the Shanghai to Rotterdam route is currently close to a week, compared to the median level of 2.79 days last year.

In Europe, carriers have begun skipping port calls to avoid congestion and loading only empty containers before heading back to Asia, where containers are in high demand for exports and business is most lucrative because of record freight rates.

That has caused pain for some European importers, as their goods have required extra shipment between European ports. It has also upset some European exporters, who have had bookings rejected by carriers that are prioritising moving empty containers to Asia as quickly as they can.

“As carriers cut port rotation, the vessels are going back to Asia and clearly they can’t pick up empties from one or two ports,” said Edward Aldridge, senior vice-president at freight forwarding agency Agility.

“They are going back to Asia not fully laden with empties. That’s going to have an impact on container availability in coming weeks in Asia.

“The ripple effect of the Suez [incident] would be ships out of their normal pattern [of sailing], not calling where they should be calling, not picking up empties where they should pick them up. Essentially it means reduction in capacity – the supply and demand gap widens further for the short term.” 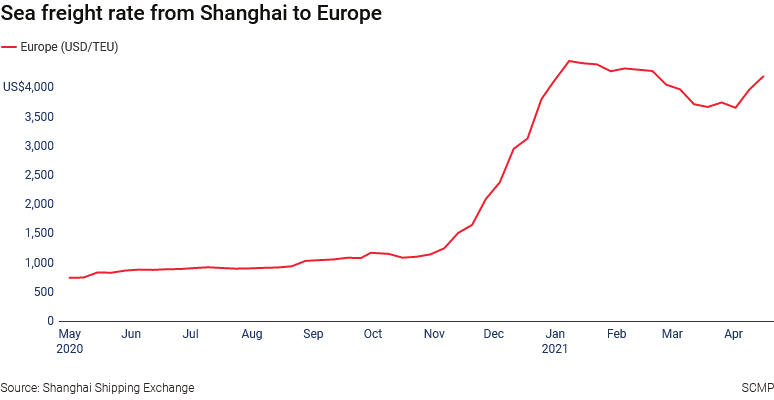 In Shanghai, Ge Lei, who owns one of China’s largest bicycle factories, is facing a hiatus of close to a month between now and mid-May on bike shipments to the United States, his main export market, because it is too difficult to secure containers.

“I think it’s less to do with price, because even if I am willing to pay more, there is still no container,” Ge said.

According to recent surveys of global manufacturers conducted by IHS Markit, the “stretching of supply chains” over the last year has extended delivery times to levels “unsurpassed in over 20 years of data availability.”

On transpacific trade routes, May is the start of a new year when regular exporters settle a new freight contract price – as opposed to one-off shipments – with carriers. That means many Asian companies will be aiming to ship as much as they can before the end of April, when prices change.

This year’s contract price could be a third higher than last year, said Aldridge, adding disruptions across the industry were like something from a “completely different galaxy” and some shippers were willing to pay thousands of dollars above usual prices.

Aldridge said one carrier told him a customer was willing to pay US$17,000 per forty-foot equivalent unit (FEU) for shipment from Shanghai to the US east coast.

As of Wednesday, the one-time spot freight rate from Asia to northern Europe was more than US$7,300 for every FEU, while rates from Asia to the US west coast and east coast stayed at around US$4,950 and US$6,200 per FEU respectively, based on Freightos Baltic Index.

“The port congestion and container shortage are two sides of a coin,” said Judah Levine, research lead at Freightos, which operates an online international freight marketplace.

“If it affects one [trade] lane out of Asia, it’s going to affect other lanes as well because they are all competing for [shipping] the same empty equipment back to Asia.”

Before Europe bound shipping fees started soaring last November, prices from Asia to the US saw four months of surging prices because major ports on the American west coast were swamped by rising imports that held up ship capacity and containers.

Based on data from Panjiva, a global trade platform owned by S&P Global, US seaborne imports handled by container lines rose 50.6 per cent in March from a year earlier, hitting a record 3.02 million TEUs. Compared to 2019, the March imports jumped 36.9 per cent.

According Freightos, the one-time shipment cost from Europe to the US, which was unaffected by the pandemic last year, has increased 60 per cent since the start of this month and surged 87 per cent since January, as carriers diverted some services from other routes to meet high import demand in the US.